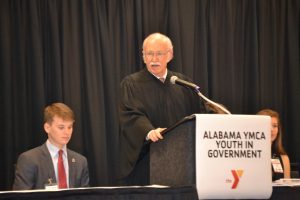 Parker went on to co-found the Alabama Policy Institute with U.S. Rep. Gary Palmer. In his remarks, Parker stressed the importance of the relationships made during this weekend. “Many people that I met for the first time at YMCA Youth Legislature have risen to very important places in our society,” he said. They work in government, business and charitable work, he added. As Parker put it, these people you meet at Youth Legislature will be “treasures” for you in the future.