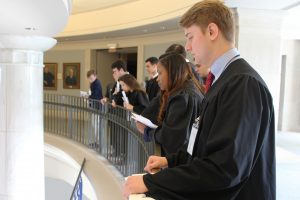 Friday morning, the justices of the Youth Alabama Supreme Court toured the Heflin-Torbert Judicial Building to learn more about the history of the position they are serving in this weekend.

The tour guide presented many facts about the building, including that the marble used was from the same quarry where Michelangelo got his marble. The center of the floor in the atrium includes a steel cutout of the state of Alabama with Montgomery in the center. Upstairs, portraits of past justices line the halls in remembrance of their service.

In the Alabama Court of Criminal Appeals chambers, the youth justices were able to ask Alabama Supreme Court Justice William Sellers questions about the inner workings of the Alabama Supreme Court. He shared that the most difficult part of his job involves “life or death situations,” including setting the dates for convicts on death row. He gave a word of advice to future law students: “Do not major in pre law.” He explained that this major can greatly narrow your future options.

He also discussed the complicated process through which he ended up being elected to the Supreme Court. He began as a tax lawyer and worked for Kay Ivey long before her governorship. Sellers encouraged Ivey to run for governor and served as her campaign manager. Years later after she was re-elected, a position on the court opened. Naturally, she thought of her old friend Sellers, appointing him Supreme Court justice. In November 2018, he was elected to a full term without opposition. When asked about the most exciting part of his job, Sellers mentioned oral arguments, which he considers “the best show in town.”

Reviewing Constitutionality
Later, during a 2 p.m. public hearing, the youth justices heard arguments on the constitutionality of House Bill 99 by Rep. Coleman Turnipseed of St. Paul’s Episcopal School in Mobile. 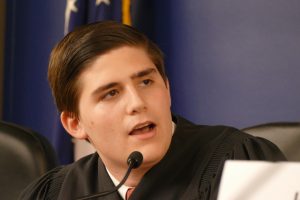 The bill would have required every child born after Jan. 1, 2019, to be vaccinated against 13 diseases. Medical allergies would exempt children from the vaccination, but religion would not be taken into account as an eligible exemption. Physicians would be required to turn in all vaccination information to the Alabama Department Public Health, which would keep a record of the vaccinations. Public and private schools also would be required to keep vaccination records. People who choose not to vaccinate their children would face a $200 fine per immunization.

An issue raised about this bill was the violation of doctor-patient confidentiality. Turnipseed argued that this confidentiality can be overridden for the greater good of all Americans.  Attorney General Cyprian Dumas cited the supremacy clause as the Health Insurance Portability and Accountability Act (HIPAA) privacy rule is a federal law.

Another issue with the bill is the violation of freedom of religion and expression. Turnipseed argued that the bill did not discriminate against religion, because it would be applied equally to every citizen. As precedent for her bill, Turnipseed cited Jacobson v. Massachusetts (1905), which required residents to be vaccinated against smallpox. Dumas argued that although HB99’s intent isn’t to discriminate, by targeting a specific religion and requiring a fine, the bill becomes discriminatory. He also said that only the individual is being harmed not the entirety of the population.

After the Supreme Court discussed the bill privately, Supreme Court Justice David Hantouche announced that the youth court had declared the bill unconstitutional under the First Amendment due to religion and privacy.