The office of Alabama YMCA Youth Legislature lieutenant governor, while a large role and far from an easy task, is not often closely examined by conference delegates. Specifically, the lieutenant governor presides over the Senate and all joint sessions. The person in that position does not write bills nor participate in debate. 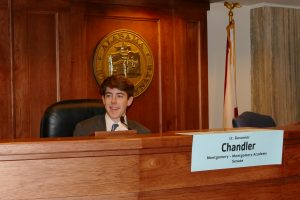 2019 Lt. Gov. Carter Chandler, a senior at The Montgomery Academy, met the challenge with enthusiasm, encouraged by an outstanding Senate chamber. Chandler, who also spent his 10th and 11th grade years in the Senate, calls this year’s chamber the “most well-rounded, productive group [he’s] ever seen.”

The Senate’s effectiveness relies on the attitude of the chamber, Chandler said. The lieutenant governor’s duty primarily rests in his ability to direct debate. In previous years, Chandler was a delegate heavily involved in Senate debate. He said he was taken aback this year by how little he felt the desire to interject his views into the discussion.

“You notice how effective the Senate has been this year, when you find yourself sitting back watching, letting the debate flow naturally without feeling like there’s an element missing to the discourse,” he said. This experience has been rewarding for Chandler, as he has watched the chamber grow over three years.

When pausing to reflect on this year, Chandler said he learned two key lessons: “First, I realized that when I am nervous about something, it’s because I care. It was crucial that I realized this, so I could channel my passions productively.” Second, he said, “I have learned that it is more than acceptable, and even expected, to not completely fall into rhythm right away.” Along with passing on lessons learned, Chandler wants to leave a legacy. He said he hopes he has “made the Senate and ALYIG in its entirety a richer experience and a happier place for those involved.” Like Gov. Jared Schaffer, Chandler hopes that the delegates have adopted the same love for ALYIG and will continue to allow the program to prosper. Lt. Gov. Carter Chandler encourages us to love this program with the same passion he does.