After expressing his happiness and gratitude for his position at the opening of the  72nd Annual Alabama YMCA Youth Legislature, Gov. Pavel Shirley offered three pieces of advice.

Delegates should try their best to speak when they have the chance, he said. Every delegate has a voice that needs to be heard, the governor contends. 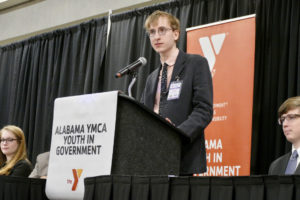 He next suggested reaching out beyond one’s home delegation, saying that 90% of participants end up not campaigning for an elected position, so they should reach out and meet new people when they can.

Lastly, Shirley ended his speech by suggesting delegates slow down and appreciate their time at Youth Leg.

The youth governor said he decided to run for his position because of the friendly participants of the Youth Legislature program.  He described the 246 bills introduced this year as well-thought-out and of high quality.

He ended by wishing everyone good luck in their debate and in the progress of their bills.