“There can be no justice without an act of mercy,” Alabama Speaker of the House Mac McCutcheon told delegates to the 2020 Youth in Government conference during opening ceremonies.

Merciless justice defeats the purpose of democracy and government, he added. The two require a balance, which is the duty of the people and the representatives they chose. In government, communication is key to maintaining the delicate balance of a fair and just democracy, the speaker said. 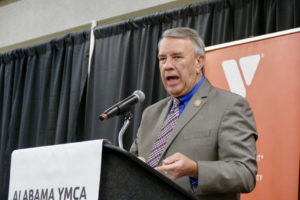 McCutcheon spoke on the role of government and what one must remember in order to be an effective participant in government. He began by explaining how the Alabama House of Representatives functions. The speaker sets the schedules, chooses committee members and appoints committee chairmen, he said.

The Alabama House and Senate differ, according to the scale of the districts they represent. One House district can have up to 44,000 people as opposed to a Senate district, which may have up to 250,000. This causes House members to work closer with the people to comprehend and come up with effective solutions. Senators use a broader perspective and work on a bigger scale, McCutcheon said. He spoke of the importance of having both perspectives in order to have a good grasp on the people’s wants and needs. Both are equally important to finding the solution that benefits all, he said.

The purpose of a representative is to “take care of the business of the people near and dear,” McCutcheon said. Officials cannot forget why they were chosen for office. They are servants to the people, who provide them with the best tools to succeed. Representatives must respect the democratic process and note that all people are equal under the law and under God, he said.