After a long day of respectful debate, the delegates running for offices gave their campaign speeches Friday, Feb. 21. Delegates heard from candidates for nine different positions.

Delegates first heard from the three candidates for First Year presiding officer. Manasa Chintala of Spain Park began by talking about her evolution in public speaking, from winning fake arguments in the shower to the euphoric feeling of speaking at Youth Leg for the first time. Her goals are to send her new delegates home with a sense of compassion, courtesy and individualism. Next, Jeffrey Ford of Saint James talked about how he felt the First Year chamber is the best place to make an impact. Ford says his plan is to serve with diligence, leadership and respect to help new delegates make a smooth and comfortable transition into the Leg program. Olivia Webb of Northside Methodist Academy in Dothan talked about her experience on the governor’s Cabinet, saying she feels that her skills as a natural born leader and her helping heart would make her an effective presiding officer.

Next delegates heard from House floor leader candidates. Jane Grey Battle of Mountain Brook High School expressed her desire to watch and encourage good debate. Her goals include making sure new ideas are brought forward and debate stays lively and moving. Next, John David Craft of Davidson High School in Mobile talked about the importance of a solid calendar of bills that stimulate good debate and civil discourse. Craft wants to highlight unpopular opinions for debate.  Lastly, Jake Yohn of Saint James School in Montgomery discussed his goal to facilitate diverse and fresh debate as well as making new friends.

Speaker pro-tempore candidates came next, starting with Nathaniel Bass of Vestavia Hills High School. Bass talked about how the Youth Legislature program has the potential to change perspectives as well as opening doors to allow people to meet others from all over the state. Easton Strickler of The Montgomery Academy explained his reason for campaigning with a silly anecdote about his 7th grade year in Junior Youth Legislature. Strickler’s goal is to help those who are not confident in their speaking abilities find confidence and their voices.

The candidates for House Speaker spoke next. Ethan Laney of Cherokee County High School talked about lessons he learned while competing in the Youth in Government program. Laney talked about being yourself, the importance of public speaking and making good memories. His goals are for delegates to celebrate their differences and to reach out to those who are afraid to speak. Lindsay Tadlock of Spain Park talked about her experience at CONA as a sophomore. Tadlock’s goal includes being a voice for those who have something to say and to host an environment of growth and civility.

Marielle Cornes of Mountain Brook was the first of the three Senate floor leader candidates to speak. She talked about how the Youth Legislature changed her life, helping her get out of her comfort zone and make friends from all over the state. Cornes’ goals are to provide support for all delegates and get to know everyone. Alicia Jones of Davidson wants to continue to strive for respectful but lively debate, while maintaining a comfortable environment. Chris Yang of LAMP in Montgomery said he loves to express his position on bills. Yang’s goal is to give everyone’s bill the attention and debate it deserves as well as provide new perspectives on them.

Next, Secretary of State candidates spoke, starting with Kendall Hardaway of Saint James. Hardaway believes that her creativity, class and manners will help her be an effective leader. Her goal is to encourage debate with a can-do attitude and morality. Stella Ross of Vestavia talked about empathy and how it is the foundation of every relationship. Ross wants to better delegates as people and inspire them to be agents of change.

Polls open at 4 p.m. See schedule and photos of the candidates in the Voter Guide linked here and shown below. 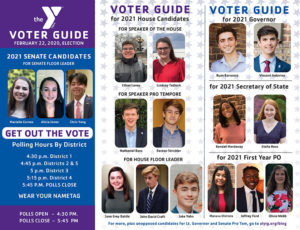