Saturday afternoon, Feb. 22, the delegates from both the House and Senate gathered to hear from their 2021 gubernatorial candidates Vincent Indovina from the Spain Park High School delegation and House Pro Temp Ryan Barranco from the St. James School/Montgomery delegation. 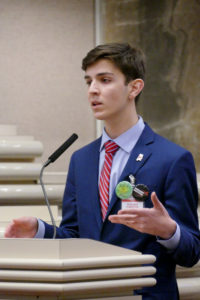 Vincent Indovina took the floor first to present his candidate’s speech on why he should be elected to the position. Indovina does not solely wish to have the title of governor for show, but to have it to be able to be the voice for the people, to be the person someone can turn to and to be the conference head who is devoted to everyone. Indovina cites his experience of being a delegate for the past three years as giving him the tools to be the best candidate for governor. As a delegate, he said he has a better comprehension of how the changes a governor makes affects the people of the conference directly. This experience helps him to make the best decisions that benefit the delegates the most. In order for him to make the best decisions possible, Indovina would wish to meet with representatives from all 25 delegations to make sure the changes work and that their voices are heard. If Indovina is elected governor, he would like to introduce a district commissioner position to serve on the governor’s staff in order to fulfill this goal. Indovina closed his speech with what being a youth governor means to him. A youth governor has the opportunity to transcend that title and to gain insight from others to lead a conference that is in the interest of more than 300 people. His goal as youth governor is to make a legacy so participants of the ALYIG program can be proud. 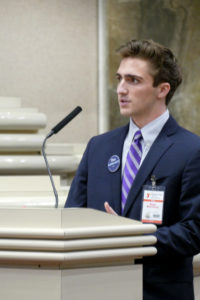 Following the previous candidate’s speech, Ryan Barranco opened by thanking all those who made it possible for him to get to the point of being a youth governor candidate. Barranco cited former youth Gov. Claudia Hubbard as being his biggest inspiration, supporter and mentor. Quoting the wise words she once said to him that, “Never think you’re better than anyone else in this program, because you’re not.” Barranco has lived by these words for years and continues to believe in them. Everyone has passions and are good at different things. Barranco revealed that he is always thinking of ALYIG and ways it can be improved. Barranco said there can always be positive change and things do not have to remain stagnant. He listed numerous additions to the program that he would like to implement that include: pro/con placards to even out debate, more involvement between the local media and the YIG media staff, and to create an ambassador program so delegates may be able to attend other YIG conferences in states across the United States. As youth governor, Barranco would wish to move away from the politics of office and solely focus on giving back to the people. Barranco shared that he is always inspired to give back and wants to inspire the people like they inspire him.