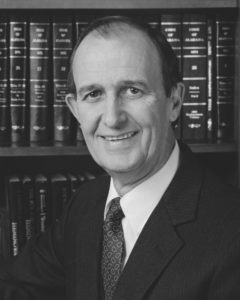 Justice Hugh Maddox was a gentle man who made a tremendous impact on the YMCA for many decades.  In 1979 he helped found the YMCA Youth Judicial program in Alabama.  Although it began with only a handful of students as part of Youth Legislature, Youth Judicial has gone on to serve thousands of young people each year.  Many of these participants have gone on to become attorneys and judges and ALL have increased their understanding and appreciation of the legal process in our country.  The Hugh Maddox Award was created to recognize the most outstanding team for their performance inside the courtroom as well as their character and statesmanship outside the courtroom.

Justice Maddox was chosen as the YMCA Man of the Year in 1988 for his outstanding service to youth.  He served on the Youth in Government Board and continued to make a significant impact on YMCA Youth after his retirement from the court in 2001.

Justice Maddox was the longest serving justice in Alabama history (1969-2001) and he literally wrote the book on trial procedure (Alabama Rules of Criminal Procedure).  But he will be remembered in the hearts of many as a gentle giant who had loved young people and rallied others to support programs that helped them to grow in Spirit, Mind, and Body.