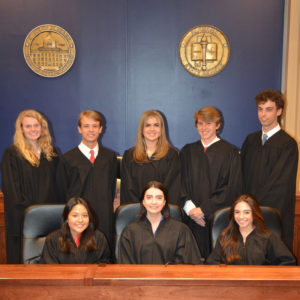 On April 22, 2022, the Alabama Youth in Government Supreme Court justices held a public hearing to determine the constitutionality of Senate Bill 2, “Mandatory Background Checks for Private Firearm Sales.” The bill by Ramsey High School delegate Kylan Benson attempts to enforce required background checks through federally licensed officials for all private firearm sales. The consequences listed in this bill state that the failure to complete proper background checks will result in a $500 fine to the seller. Furthermore, if the seller fails to complete a background check and the firearm is used in a crime, the seller would be civilly and criminally liable for damages resulting from the firearm use.

The Supreme Court was called to determine if this bill upholds the 4th amendment of the U.S. Constitution. The 4th amendment states that “the right of the people to be secure in their persons, houses, papers, and effects, against unreasonable searches and seizures, shall not be violated, and no warrants shall issue, but upon probable cause, supported by oath or affirmation, and particularly describing the place to be searched, and the persons or things to be seized.” 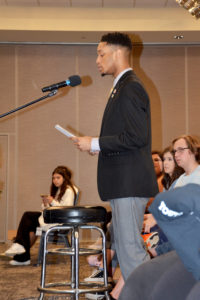 Supreme Court Justice Will Kitrell delivered the opinion of the majority stating that, “After hearing two compelling arguments on Senate Bill #S002, I, along with the majority of the court find the bill unconstitutional. The 4th amendment protects the rights of citizens against unreasonable searches and seizures. Further precedent from cases such as Carpenter v. United States deems that an excessive collection of data on digital third parties was a violation of citizens’ 4th amendment rights against unreasonable searches and seizures. On behalf of the majority of the court, I believe that the 4th amendment applies equally in the case of mandatory background checks, as the collection of information from mandatory background checks would violate digital third party privacy and that there is no sufficient probable cause to apply these background checks to all Alabamians.”

The dissent written by Chief Justice Mary Sullivan states that:

“There are points brought forth by the majority of the court that I agree with. It is a general understanding that a person’s “right to bear arms shall not be infringed.” But, I find myself nonetheless, in disagreement with the judgment of the court that Senate Bill 2 is unconstitutional on the grounds that it violates the digital privacy of a third party member.

The court concludes that mandated background checks on the private sale of firearms is an infringement on privacy, however, I don’t believe that such infringement exists. Since the buyer is made aware of the mandated firearms checks prior to their purchase, their decision then to continue with such purchase should be considered as consent to the background checks. Attorney General Isabella Campos argued that the consent would be unwillful, but those are grounds that I, along with Justice Paul Murray, cannot agree with because she brought forth no evidence that buyers would be coerced.

I have no concerns regarding mass obtainment of private data from these background checks because as Delegate Benson enthralled, such obtainment by the government is already present in our society today. Seeing as both public and private corporations already obtain mass data on employees’ backgrounds, I don’t believe that the background checks prior to firearm sales would have any more of an effect.

It wasn’t the argument of Delegate Benson that ultimately persuaded my ruling though, but rather a question asked by my colleague Justice Will Kittrel, the author of the affirmative opinion. He questioned Attorney General Campos on how the high crime rates in America can constitute probable cause for background checks. While I don’t agree with Justice Kittrell’s ultimate ruling, I do agree, however, that the high crime rates in Alabama can justify these background checks. The benefits brought forth by Senate Bill 2, in my opinion, greatly outweigh any concerns of third-party digital privacy invasion and I urge additional delegates to bring forth similar bills. The safety of Alabamians needs to be a top priority, but after hearing the majority opinion I am gravely concerned with the trajectory of the court.”