Judge Keith Watkins, chief judge of the U.S. District Court for the Middle District of Alabama, said he was honored to be asked to speak to the students at Youth Judicial during Saturday’s opening session. He encouraged students to learn everything they can about civics. In order to reach that level of understanding, students have to actively participate in programs like Alabama Youth in Government, he said. Youth Judicial is hard. Teams spend months learning how to act in courtrooms and argue in front of a judge. “Avoid easy things and attack hard things,” Judge Watkins said. Youth in Government is hard because it is the best way to learn our civic responsibilities. We learn best when we are challenged.

Watkins received his juris doctorate in 1976 from the University of Alabama Law School. On Sept.28, 2005, he was nominated by President George W. Bush to a seat on the U.S. District Court for the Middle District of Alabama. Watkins was confirmed unanimously by the U.S. Senate on Dec. 21, 2005, and received his commission on Dec. 27, 2005. 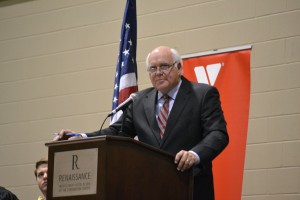