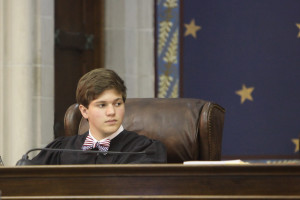 Chief Justice Jim Schillaci presides over a trial during the 2014 YMCA Youth in Government Judicial program. Photo by Ben Jackson

Welcome to the 2015 Youth Judicial competition.

Every year, people come together from all over Alabama to compete, meet new people and make new memories. However, it is u
p to you as the participants to ensure that we have a great 2015 year.

I would like to issue a challenge to everyone to make an effort to make new friends and create new experiences. Make this year the best competition we have had yet.

I encourage anyone interested to run for election at the district and state levels. I lost two of my first three campaigns. The first was to Jake Hemmings in a Youth Legislature election. In the second one, I could not get enough votes at the district level. I continued to put myself in unfamiliar situations and tried to meet as many people as possible throughout the state. After the third election, I am your chief justice.

This program truly does do great things, and I hope you all are happy to be a part of it.