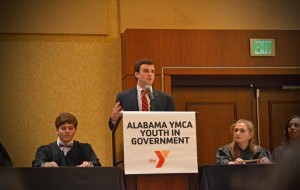 The biggest regret that delegates can have at the end of the 2015 YMCA Youth Judicial Conference is not fostering friendships, said Youth Gov. Noah McNelley.

McNelley welcomed everyone to the program and recognized those attending the conference for the first time, as well as the senior class of 2016.

He stressed, “We’re not all season professionals, we’re just citizens trying to model government.” He encouraged everyone to share the weekend with others.

McNelley mentioned this year’s YIG slogan, “pass the torch, light the world,” and encouraged everyone to keep it in mind throughout the weekend. He also said that democracy must be learned by each generation.

He quoted Luke 12:48: “To whom much was given, of him much will be required.” He encouraged everyone to meet new friends, try their best and enjoy the conference.

McNelley, a senior this year, has been involved with the Youth in Government program since 2013, according to Judge Olivia Pride, who introduced him. She said that he has gained many honors and achievements since then, including the “2013 1st Year Outstanding Delegate.”