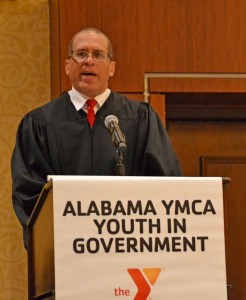 U.S. District Judge Terry Moorer, who swore in the 21 judges as well as the 650 participants of the 2015 Youth Judicial Conference, urged us to remember to play our part in society.

“Showing up for jury duty is just as important as serving in the military,” he said.

“We are all affected by the law,” said Moorer, a Greenville native who has been a federal magistrate judge for the U.S. District Court of the Middle District of Alabama since 2007.

“The law is as broad as the human experience,” he said. “There is nothing you do that the law does not touch.”

Moorer received an associate’s degree from Marion Military Institute, a bachelor’s degree from Huntingdon College, and a juris doctorate from the University of Alabama.