The two candidates for the 2016 chief justice position addressed the full conference Saturday evening. Here’s a synopsis of what they had to say: 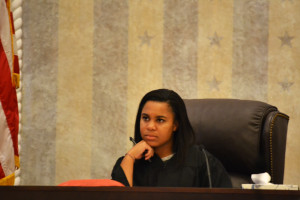 Talya Whyte
Judge Whyte reminded everyone to be friendly, because in the long run you will remember the people, not the trials. She also said that she’s not intimidating and anyone can come talk to her at any time. She wants people to ask her questions so she can help in any possible way she can. She ended her speech with her slogan, “Vote right, vote Whyte.”

Ford Cleveland, who introduced Whyte, said she is on her school’s honor council. Whyte served as an attorney for two years previously at Youth Judicial, which taught her both skill and responsibility, Cleveland said.

Judge Harris started off her speech by talking about how much Youth in Government means to her. She says that two major factors of the conference are professionalism and state law. She also stated that she has made plenty of friends from Youth in Government activities and that she has connections to youth all over Alabama. Why should we elect her? Judge Harris says we should elect her because this program has affected her so much, and she wants to give back. She reminded everyone to show kindness, share knowledge and pass the torch.