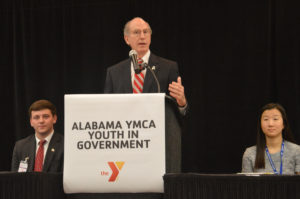 Young Boozer, Alabama’s 39th state treasurer and the guest speaker for the opening session of the 69th Alabama YMCA Youth Legislature, immediately addressed the elephant in the room – his name.

“Yes, that is my real name,” he told the crowd of chuckling teenagers.

After getting that out of the way, he detailed his life in Alabama government and how his career has progressed.

Boozer officially ran for office for the first time in 2010. Immediately, he ran into a road block, all of his signs disappeared. After some reflection, he and his staff realized that putting his signs up in Auburn and Tuscaloosa was probably not the best idea, considering who lived in those towns. “All of the college students wanted a Young Boozer sign,” he said. “It created a great buzz,” he added. It took the students a few seconds to get that one, but they eventually laughed.

Ever since that minor bump in the road, Boozer said his political career has been smooth sailing.

Now he is control of the state’s tax revenue and cash, taking in more than $100 million a day and having to manage $3 billion on a short-term basis. Overall, he is either directly or indirectly responsible for $45 billion in assets. He refers to himself as a member of the Magnificent 7 (one of the state’s seven constitutional officers).

In retrospect, Boozer acknowledged that his first time running for office was actually 51 years ago at Youth Legislature in 1966. Youth Legislature is where he initially learned about civics and politics, “and it has served me well,” he said. Youth Leg is also where he learned that you don’t always win and “politics is the art of compromise.”

Boozer also spoke about an instance where he was contacted by a student named Quinn Smith, who was running for class president. In response to Smith, Boozer shared his five-point plan for success:

To end his speech, Boozer left the delegates with a quote from a philosopher from their generation – Lukas Graham.