During a 2 p.m. Friday  public hearing, the youth justices of the Alabama Supreme Court heard arguments on the constitutionality of HB7 by Rep. Russell Weas of Mountain Brook High School 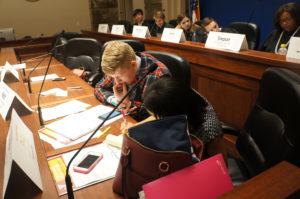 An issue with this bill is whether or not it would interfere with the First Amendment right to Freedom of Religion. Weas shut down this argument by stating that it is illegal for teachers to preach in class. Weas states that religion plays a major role in today’s society, so it is necessary for people to learn the foundations of it. Instead of preaching religion, the class focuses on religious texts and teaches how they have affected modern society and government.

Attorney General Olivia Pride argued this bill is unconstitutional because the textbooks are biased and discuss topics that will make students question their religion. The textbook also touches on many controversial topics such as capital punishment and abortion.

After the Supreme Court discussed the bill privately, Supreme Court Justice Addison Smith announced that the bill is constitutional as long as the students have freedom of religion and the material remains secular.