At the opening session of the Alabama Youth in Government’s 70th Annual Youth Legislature Conference, Alabama Chief Justice Lyn Stuart spoke about the importance of shaping a society led by the “wise and honest.” 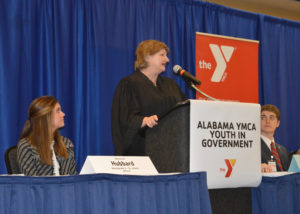 She quoted founding father John Adams who said, “If wise men decline, others will not. If honest men refuse to do it, others will not.” She explained, “He was making the point that if wise individuals and honest individuals do not step up to serve, those who are not so wise, and even worst, those who are completely dishonest will step up to serve.”

She added, “You all, everyone in this room, are the future of the state, of this nation.” 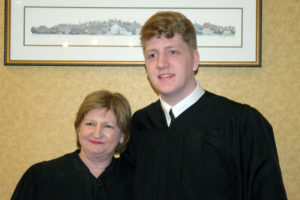 The chief justice also related a story about a woman asking her at a speaking engagement in 2001 or 2002, “When did you know you wanted to run for the Alabama Supreme Court?”

“The question quite frankly took me a bit aback,” she said. “I had to collect my thoughts and I paused for a second and I gave her the absolutely truthful answer: Never. Because who would have thought the little girl from Atmore, Alabama, could ever serve on the Alabama Supreme Court,” Stuart said, her voice and emotion breaking after she said “ever.”

“Never believe that you cannot do anything you want to do,” she challenged the delegates.