U.S. Sen. Doug Jones spoke Friday to Alabama Youth in Government delegates, reflecting first on the events and experiences that led him to become a senator for Alabama. 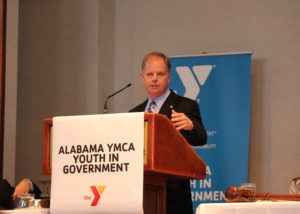 With many grueling tasks, including making more than 1.2 million phone calls, his campaign journey was not easy. Even in his short period serving as senator so far, he said he has begun to initiate change. Along with being a big believer in coming together to make a difference, he also detailed his focus on net neutrality, college affordability, climate change, healthcare and school safety.

He encourages societal growth in Alabama through respectfully reaching common ground despite a large divide in ideologies, while also firmly ensuring that every voice and stance is heard. “The key for a strong Alabama future is collaboration and discussion,” he said.

Alabama’s Democratic senator said one of his proudest moments was taking action to prosecute the four men who killed four girls when they bombed the 16th Street Baptist Church in Birmingham in 1963.

Young people, faced with violence and discrimination, led the way to change in the civil rights era, he said. Now, young people have stepped to the forefront in seeking solutions to recent school shootings, he said.

“I’ve been impressed with the students of Parkland, Florida,” he said. “They have spoken out from their grief to demand change in Washington. The voices coming out of Parkland (Marjory Stoneman Douglas High School) are going to have an impact in a way we haven’t seen in the past.”

He challenged the Alabama Youth Legislature delegates to  “make yourself a part of the conversation. Don’t wait to be invited to the table. Make room for yourself. Elbow your way in if you have to.

“Begin now, today, with this Youth Legislature to write the history of your generation,” he said. “Do not wait on someone else to do it. When you do, this state is going to be a far better place.”