All eyes were on the black Tahoe that pulled up Friday in front of the RSA Activity Center in downtown Montgomery as Alabama U.S. Sen. Doug Jones emerged from the backseat. 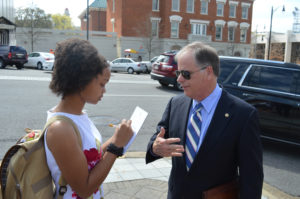 As a high schooler, Jones actually did not see himself ever holding an elected office. “I actually wanted to be a doctor” he laughed in an interview before the luncheon. Eventually, circumstances arose that made him realize that he wanted to go into public service. “But this was later down the road,” he explained.

“A lot of things happened that resulted in me wanting to become a U.S. attorney,” explained Jones, who served as a U.S. attorney for the Northern District of Alabama from 1997 to 2001. “I saw the reaction that came with completing positive acts. After being able to prosecute the case surrounding the church shooting that left four young girls dead based off their skin tone, I knew that something had to be done.”

During his luncheon speech, the senator encouraged delegates to be involved.

“Some issues may seem impossible to solve,” he stated, referring back to the legislative weekend. “You’ve taken an important step, however: you’re engaged. Stay engaged. There have been times I’ve been discouraged. I didn’t want to get engaged, but it’s never too late to do the right thing, to seek justice.”