Committees of independent judges with expertise in bill writing chose these bills as the best of the 2018 Youth Legislature session: 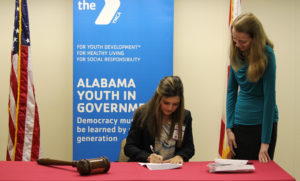 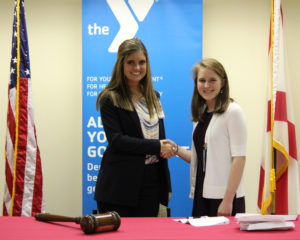 Gov. Claudia Hubbard signed into law 10 bills, which either passed both the Alabama Youth Legislature House and Senate or were approved by the members of the First Year program. Besides SB22, SB36 and FYB2, the bills signed into law were:

SB19, A Necessity for Any Life Act by Hayden Sledge, Mountain Brook High School, Birmingham – Public and private schools that donate leftover food to local shelters would receive a tax break that would be determined by the value of 15 percent of the donated food.

FYB40, Recycling Routes in Alabama Act by James Snead and Easton Strickler, The Montgomery Academy – Requires recycling pickup service in every Alabama city with a population of 1, 000 or more manned by nonviolent prisoners.

FYB71, Death with Dignity Act by Hannah Hale, The Montgomery Academy – legalizes physician-assisted suicide for those with terminal illnesses.

Other photos of bill signings can be found here.