Before the gubernatorial candidate debate and speeches, the Best Bill Awards for the House and the Senate were presented in the Alabama House of Representative chambers at the Alabama State House.

Rashim McKinney, vice president of development at Gibraltar Solomon, who presented the House Best Bill on behalf of the Montgomery Britton YMCA board of directors, said, “With the brainpower in this room, y’all could get our problems solved in two to three weeks.” He added that the Best Bills represent “great ideas, but also have to be practical.”

Marshall Long, an attorney on the Alabama Senate staff, who presented the Senate award on behalf of a selection committee, said, “We looked for bills that were creative, well written and important to our state.” 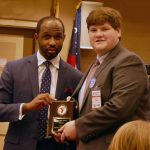 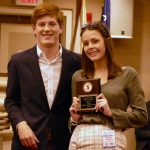 HB 2, the Heroes at Home Act, by Brody Ratliff and Alex Fisher, Trinity Presbyterian School / Montgomery, which over a four-year period, provides veterans with therapy, housing and training. This legislation was also part of the governor’s Special Order calendar, passed both chambers and was signed into law.

The First Year Best Bill was announced during the closing ceremony on Sunday, Feb. 24.

FYB17 by the Civil Asset Forfeiture Reform Act by Mary Raines Alexander, Mountain Brook High School, which calls for mandatory tracking of properties seized by the police in a statewide database that records possessions forfeited to allow items to return to the proper owner after an investigation.

Gov. Jared Shaffer signed 14 bills into law during the 71st Alabama YMCA Youth Legislature. These bills either passed both the Youth Legislature House and Senate or were approved by the members of the First-Year program. The bills that become law are:

>> Photos of all of the bills signed into law.
>> Links to all of the House, Senate and First Year bills.