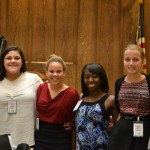 By Anna Claire Bullard and Mackenzie Montiel Tomorrow TODAY Staff Writers The 2015 chief justice candidates participated in a candidate forum Saturday. What follows is a summary of their remarks. Judge Jim Schillaci was introduced by Christina McLaughlin. Schillaci joked that he originally was interested in a mock trial because he thought there would be … [Read More]

Tomorrow-Today Alabama asked all of the 2014 justices: Who is your legal hero and why? Chief Justice Bea Tisher, St. Paul’s Episcopal School, Mobile My legal hero is my grandmother Peggy Givhan. She was a federal judge in Montgomery, and she is who made me want to be a judge. Gaten Armstrong,  Montgomery Catholic Preparatory School … [Read More] 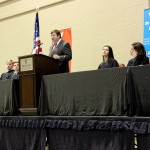 By Mackenzie Montiel and Emma Heaton Tomorrow Today staff writers During this year’s opening session, Chris Friedman, who has lead the Youth Judicial training team for 10 years and also wrote the case for this year, gave us two challenges. Friedman is law clerk for the U.S. District Court. First, he said to respect the … [Read More] 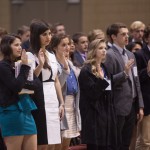 By Christian Cooper and Will Inge Tomorrow Today Staff Writers and Editor in Chief Ellie Cotton At Saturday’s opening session, 2014-2015 Alabama Youth Governor Cassie Sadie expressed how ecstatic she was about the record-setting turnout of participants – more than 600 – for the 2014 season of Youth Judicial. First off, don’t get wrapped up … [Read More] 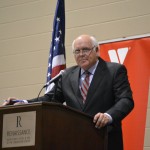 By Kendall Ann Bailey Tomorrow Today Staff Writer Judge Keith Watkins, chief judge of the U.S. District Court for the Middle District of Alabama, said he was honored to be asked to speak to the students at Youth Judicial during Saturday’s opening session. He encouraged students to learn everything they can about civics. In order … [Read More]

By Christian Cooper and Will Inge Tomorrow TODAY Staff Writers Saturday night, while you were all tied up in your cases, you missed a thrilling football game between the Auburn Tigers and the Rebels of Ole Miss. This nail -biting match proved to be a test of mental fortitude as both teams were simply trying … [Read More]